The common name of the “Candelilla” plant appears to have derived from the particular shape of the plant stalks – long, straight, erect and wax-covered – giving the appearance of little candles. Other sources indicate that the Candelilla plant was burned directly for illumination, serving the purpose of a candle. 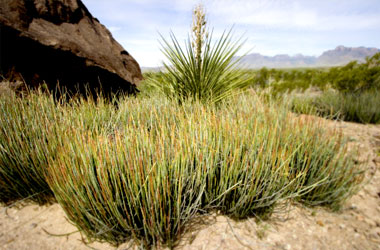 The Candelilla plant belongs to the Euphorbia species, the common name of an extensive family of flowered plants – similar in appearance to cacti – but which are clearly differentiated by the milky latex contained by the Euphorbia plants.

The plant normally grows in semi-desert regions, principally on lime soil slopes or hillsides associated with formations of rocky material. The plants root is relatively small, although a plant of moderate size can develop more than 100 stalks of a grayish-green color, with typical dimensions of 30-60 cm (12-24 in) long and 0.1-1.0 cm (3/64–1/32 in) in diameter, forming bushes of approximately 90 cm (35 in) in diameter.

During the rainy season the Candelilla plant becomes covered with small pink-colored flowers. Candelilla formations are most abundant at elevations of around 800 m (2600 ft) and are commonly associated with growths of such plants as lechuguilla or prickly lettuce, sotol palm, Chinese grass, ocotillo and diverse cactus plants. The Candelilla plant is very resistant to plagues and diseases and is only limitedly consumed by some species of wildlife that exist in the region.

In 1829, the botanist J.G. Zuccarini described the Candelilla plant for the first time with the scientific name Euphorbia Antisyphilitica, recognizing the medicinal properties of the plant juices as a remedy used by the natives of the region for treating syphilis. Today, the Candelilla plant is considered useful in the treatment of a variety of illnesses.

A new classification of the Candelilla was presented in 1909 by G. Alcocer, who named it Euphorbia Cerifera, highlighting the properties of the plant for making wax, which serves as a protective seal for the plant in retaining moisture. 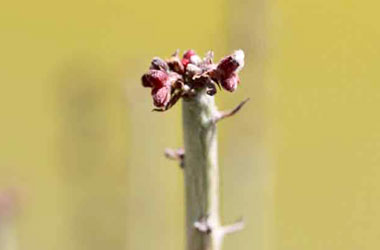 During the rainy season, the Candelilla stalks become covered with a thick sap, which then covers the stalks with wax during the dry season to prevent evaporation. Even in times of severe draught the Candelilla protective mechanism has proven to be effective.

Nearly a century ago, The Journal of the Royal Society of Arts declared “the wild plant known as ‘Candelilla’ contains wax of excellent quality and in sufficient amount to make it extremely valuable”. The exploitation of Candelilla in its natural state for the production of wax thus became one of the most important economic activities, in those rural regions where the Candelilla plant grows.

There are other plants capable of generating “Candelilla wax”, such as the Pedilanthus Pavonis Boissier and the Pedilanthus Aphyllus Boissier. However, these plants offer lower wax yields, as well as lower melting points and a lower saponification value, compared to the wax produced from the plants of the Euphorbia species.